The Genesis graphics were organized in two plans plus sprites. The most common way of drawing things in a platformer was to use the background plan for some background image, and the foreground plan for the level elements like the platforms. Sprites were usually drawn on top of these 2 plans.

However the Genesis allows you to break those rules and change the drawing order. The tiles have what we call a priority attribute, and by modifying this value, you can for example draw a part of the background plan above the foreground, or above sprites, etc. This is the technique used un Sonic loops, where the sonic sprite is drawn above the foreground plan at the beginning of the loop, and behind it at the end of the loop.

In Shrine Maiden Shizuka, I sometimes need to draw level elements on top of my sprites. It can be for secret passages, or for aesthetic reasons, like here in the village: 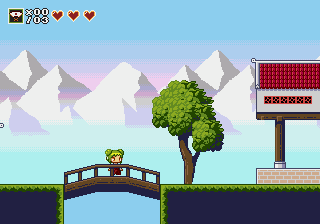